50. A Passion for Orchids and Conservation: Exhibit at Chicago Botanic Garden Orchid Show

Some are luxurious and colorful, but some others are ghostly and mysterious. There are even weedy ones, too. Orchids. They have been a beloved group of plants among collectors and viewers as well. I have a special spot for them in my heart, too. Along with wildflowers of prairies and woodlands in Midwestern USA, I have been painting native orchid species locally, and rare species from other parts of the world. A very cute pink orchid, Paphiopedilum delenatii, was once considered as extinct, but found again in Vietnam. Darwin's Orchid, Angraecum sesquipedale, is definitely one of the most impressive and anecdotal species. I painted its pollinator, Xanthopan morgani with several orchids around it emphasizing their 'problematic', long spurs and the incredibly long proboscis of the moth. Two local lady's slipper orchids and Eastern Prairie Fringed Orchid are rare and endangered species, which local conservation groups have been working hard to preserve.

Details of the paintings:


Popular posts from this blog

49. Blooms with Birds and Butterflies

As a botanical Artist, adding insects or birds and butterflies is questionable, because scientific information about the plants was the major concern in traditional botanical art.

However, insects and butterflies, particularly pollinators, and birds, seed dispersers, are very important elements in ecosystem. So, I do not mind including them. They add more actions to the very quiet botanical paintings, and attract broader audiences as well.

Here are some examples of my recent works with fun and pretty birds and butterflies. These images were used for making my new postcards and greeting cards. Certainly people like them more than the cards with only plants.
To buy post cards and greeting cards, http://www.heeyoungkim.net/store/?category=postcards
To see full images, click here http://www.heeyoungkim.net/artists/#/candice-whitman/ 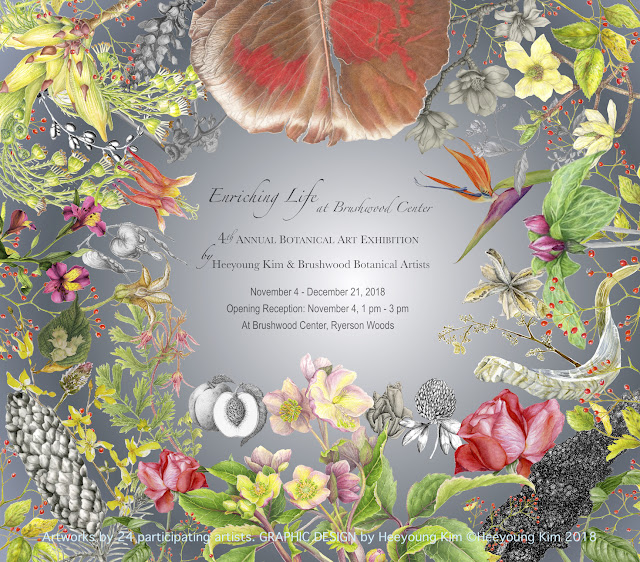 "It's getting better every year!"  Well, that is what I have been trying :). It has been delightful and grateful to study botanical art with 25 talented and aspiring botanical artists in 2018. I 'teach' them, but I also 'learn' from them. So, my students and I study togehter, and we have been building up the whole community around Brushwood Center. Each year, I see more and more people show interest in botanical art, and willing to learn more about it.
How did I design the invitation card?  As you see, the invitation card shows it all. There were too many excellent works, which caused me a serious problem in choosing one to feature on the card. So, I came up with an idea to feature everyone's work on a jumbo size folded card! So, everyone is featured! It is the best invitation card I have ever made :)))
Not only the card, but the quality of all works exhibited is quite impressive, too. I am so proud of everyone who worked very hard to make this h…
Read more

New Year!
New endeavor to get more web presence with our art!

However, we are always concerned about image stealing. In fact, we hear those news often and we are heart broken.

Bottom line is "You Must Put Your Name On Your Art!"

No skill for photoshop? No software? No time?  I would like to share my tip for fellow artists.

1. Develop simple logo or just write your name.
2. Cut it in small size, and keep it inside your smart phone cover or camera case, or just keep it handy.
3. Place it wherever you like when you take picture.
Done! It's very easy to take photos of drawing process and post them in social media.

Examples from my photos.